Birds on Parade & Birds In Residence

Have you ever wanted to be a bird? To fly, to flock, to sing to the rising dawn?

Birds on Parade celebrated our winged relatives, from songbirds to birds of prey, waterfowl to shorebirds in BC and beyond. “Birds on Parade” was a collaboration of four community-engaged artists (Paula Jardine, Carmen Rosen, Cathy Stubington and Robi Smith), over two years, with additional artists, dancers, singers, stilt walkers, and bird lovers from all walks of life.

Birds on Parade culminated in a grand parade, a great murmuration if you will, of flocks of birds on stilts and hand held bird puppets. The parade opened the Vancouver International Bird Festival and the International Ornithological Congress in Vancouver, BC, on August 20, 2018. The parade started at Coal Harbour Community Centre, flew along the seawall and ended up at Jack Poole Plaza at the Vancouver Convention Centre.

Be sure to check out this conversation with artists Paula, Cathy and Carmen with The Colloquium about Birds on Parade! 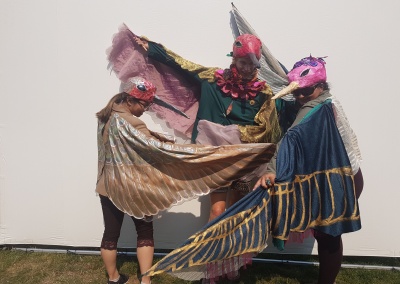 Those who lived in, or close to, downtown Vancouver, were also invited to participate in Birds in Residence at the West End and Coal Harbour Community Centres. The aim of our residency was to connect people of all ages and abilities who live in the West End and Coal Harbour, with the birds we live with. We collectively deepened our relationship with these birds through nature walks and a multitude of art forms including drawing, mapping, listening, movement, and song. We combined the insights and talents of community engaged artists with biologists, ornithologists, and amateur bird enthusiasts.

Over the year of 2018, we set out to learn everything we could about the birds who live in and fly through our neighbourhoods, reflecting on ideas of home and migration. In addition to our scheduled workshops and events, we invited people to submit their bird sightings in the neighbourhood, re-purposing the “City Bird Ballot Boxes” from the 2017 city-bird election. We were surprised and thrilled by the numbers of submissions we received, and used the submissions to inform our habitat mapping and ultimate final “map” which includes all the bird sightings submitted.

In the middle of the residency we took over the Coal Harbor Community Centre with preparations for the giant bird parade in the summer, which incorporated a number of participants from previous workshops, the Coal Harbour Community Centre childrens’ dance classes, volunteers from across Vancouver, members of the international ornithological community, and visiting artists from BC, Toronto, and Lunenburg (Nova Scotia).

We were able to engage a diverse group of people in the workshops, and were surprised that the stilt workshops attracted a high percentage of middle aged women! Including the stitching and felting in the final third of the residency brought a whole new intergenerational group of eager fabric artists interested in birds, and was an especially satisfying way to end the project.